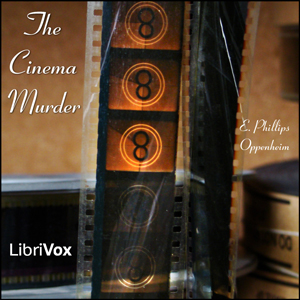 LibriVox recording of The Cinema Murder, by E. Phillips Oppenheim.

Phillip Romilly is a poor art teacher in London. He finds out that his wealthy cousin Douglas has been seeing his girl friend Beatrice behind his back. He strangles Douglas, throws him in the canal, and assumes his identity. Douglas had booked passage to America for the next day, so after a pleasant sea voyage Phillip arrives at the Waldorf Hotel in New York as Douglas Romilly. An hour after checking in he disappears again, and assumes yet another identity, one that his cousin had set up for himself. Douglas was facing massive financial problems, and he, too, had planned to avoid his problems by getting lost in the crowd in New York. Now, in chapter two…. (Summary by Maikki)

Standard or slim CD Case Insert available for this recording.

Reviewer: tuesdaynext - favoritefavoritefavoritefavorite - April 18, 2016
Subject: More romance than mystery
A psychological sketch of a luckless man driven to kill. I found it a bit strange that so many women were drawn to an admitted murderer, but the story was interesting and readers all did a good job.

Reviewer: mikezane - favoritefavoritefavoritefavoritefavorite - June 23, 2009
Subject: Great Story!
Philip is miserable. His cause? Poverty and a terrible cousin who has secretly begun dating his fiance. Philip takes revenge and then takes his cousin's place in America, where he begins life anew under a pseudonym that his cousin had planned to use. He finds fame, love, and friends, but is haunted by his past, all the more so when a pushy detective begins asking questions.

Mixed readers, all of them good, but some of the chapters have some background noises and are hard to hear, but doesn't detract from the story.

Uploaded by librivoxbooks on July 1, 2008